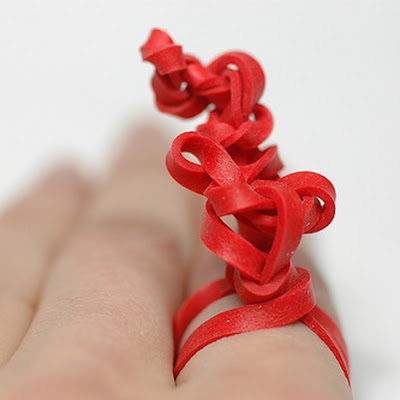 
EtsyMetal is pleased to announce that the Ring a Day Project has been accepted as an exhibit for the Society of North American Goldsmiths (SNAG) upcoming Annual Conference in Seattle, Washington. The EtsyMetal team has partnered with the PUNCH Gallery for this exhibit. “RAD, a Ring a Day for 365 days” curated by Colleen Baran, Shannon Conrad and Sara Westermark will run from Thursday, May 5 to Sunday, May 29, 2011.

Represented work will range from ephemeral and conceptual art rings to functional jewelry. The exhibit will feature 365 rings, representing a ring a day and encompassing the full span of the year. The layout will also include photographic documentation of select temporary and conceptual art rings. Rings will be chosen by the EtsyMetal curators and will illustrate the highlights and accomplishments of many hundreds of international members, selected from over 10,000 rings. 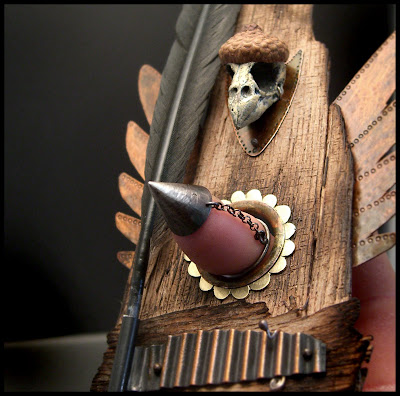 
The Ring a Day project (or RAD) is an open challenge to metalsmiths and other artists across the globe to make one ring a day, out of any material, for the entire year of 2010. The genesis of the Ring a Day project is based on an exercise taught by Ellen Wieske at Haystack. The Flickr project, which was initially proposed by Nina Dinoff, was intended as an EtsyMetal team challenge to set a daily routine of exploration and an experiment to see what could develop over the course of a year.

On a daily basis, the rings are created, photographed, and posted to the Ring a Day Flickr photo group by each participant. The majority of the artists represented here have discovered this project through social media networks such as Flickr, EtsyMetal, Etsy, Twitter, Facebook, blogs, and of course word of mouth. This project reflects a population of metalsmiths and jewelry makers who are facile with current online technology. 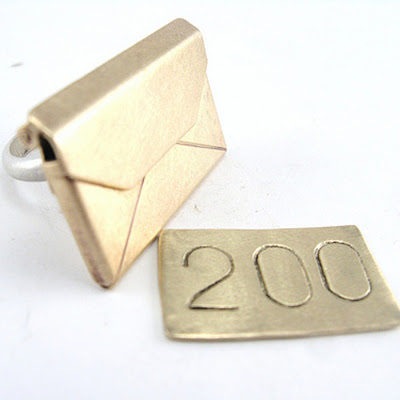 Visit the public RAD group and join the project-

Posted by sarawestermark at 6:18 PM No comments:

byzantium labradorite earrings
Originally uploaded by sarawestermark
My fingers are still aching from setting all the teeny tiny bezels, but it is work that I welcome. I am so grateful today that I can work, that I have many ideas that i want to explore, that I have ambition to move forward with excitement in the future. I am currently exploring a more "fine" jewelry style that I find intensely rewarding.

Yesterday I did something that I rarely do--I took a long nap. I let my mind wander around and draw and plan in peace and leisure. I felt in touch with my higher power and was serene.

These earrings are part of a new line which I call Byzantium. It combines influences from the ancient Roman and Byzantium styles with modern lines. Yes, the labradorite are really that lovely too!

hand fabricated out of sterling silver, 18k gold, champagne diamonds, labradorite, and blue topaz. Now I'm off to my bench to go and create some more!
Posted by sarawestermark at 9:17 AM 1 comment: 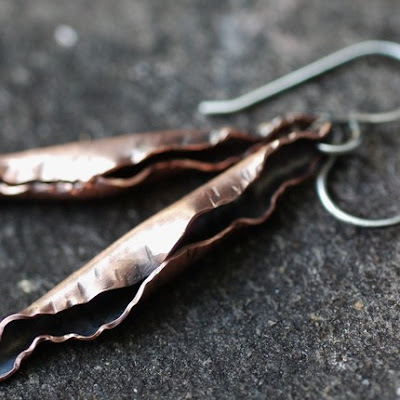 Maggie J's "falling leaf earrings"
This weekend I'm traveling to Asheville to participate in The Big Crafty at Pack Square. I'll be outside, so if you are in the area please look for me! It was such a fun show last year--I'm really looking forward to it again.

Lark Books has a really cool blog and included my etsy store front in their blog post about the event. I have many new things to show you and I'm thrilled to feature my "lily pad & reed" series.

I'm organizing my life at the moment and if I get a second wind, I might make something special for the show! I'll travel to the western side of the state and stay with my friend Maggie, who will also do the show. (Maggie will be set up inside and upstairs in the Asheville Art Museum.)

I love to travel to see my friend and to have a show. Its work, but its so much fun that it doesn't feel like work! I hope that if you live nearby, you will come and see us! (me and maggie, that is!)

Posted by sarawestermark at 3:00 PM No comments:

The Jeweler's Workbench in Waynesville, NC

Promote Your Page Too

sarawestermark
I am a Classically Trained Lyric Soprano with a Master's in Music in Voice Performance from the University of Missouri-Columbia. I have performed operatic, oratorio, liturgical music, and art song regionally in the Coastal South. My greatest passion is teaching students to love Classical Music, and to help them to achieve excellence in singing. I specialize in teaching young students, starting at 6 or 7, and training through High School to careers in Classical Singing. I use many different modes of teaching to keep their voices healthy and safe. I aim instruction to each student's level and ability, while engaging them to make singing fun. My students have competed regularly in the National Association of Teacher's of Singing Student Auditions for the past 14 years and often win top honors at the state, regional, and national levels. Universities look to my studio for recruiting top talent in the state.